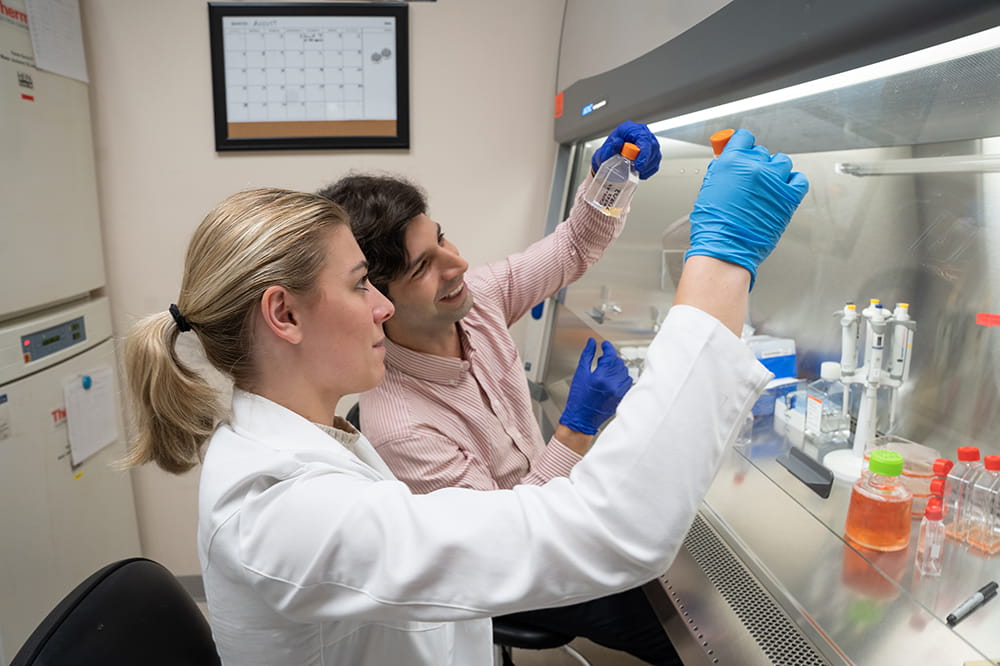 A summer in a laboratory MUSC Hollings Cancer Center can end up changing a student’s career path.

Eva Allen, senior at Charleston County School of the Artsinterned in the laboratory of Leonardo Ferreira, Ph.D. What was supposed to be a few hours a week internship turned into a fully immersed laboratory experience and a passion for research for the young singer.

“I knew I wanted to be a doctor somehow, but I always thought I wanted to be a doctor,” Allen said. “And now that I see this side of medicine, medical research, I’ve changed my mind a bit. I might like to take a few years off to work in a lab and be able to have that innovation side of medicine instead of just treating, treating, treating patients.

“Now I’m thinking maybe doing a PhD. instead or an MD-Ph.D.

Allen is already quite familiar with the patient side of medicine. She suffers from type I diabetes, diagnosed when she was only 2 and a half years old.

During her young life, she has seen how innovation can change the lives of patients.

“My whole life has been different from when I was first diagnosed,” she said. “I mean, my mom used to wake up every night and check my blood sugar. For the first 10 years of my life, she didn’t get a full night’s sleep. Well, now I have a glucometer which checks my blood sugar every five minutes and sends it to my phone and my mom’s phone and it will set off an alarm if my blood sugar exceeds the limits.

By working in Ferreira’s lab, Allen was able to contribute to research that could help him and others with type I diabetes and other autoimmune diseases.

Ferreira works with regulatory T cells (Tregs) and T cells made from chimeric antigen receptors (CARs), with the ultimate goal of improving immunotherapy options for people with cancer and autoimmune diseases. immune.

Allen said she felt empowered working on this research.

“It makes you feel like you have more control over something that you thought you had no control over for a very long time,” she said.

And although it was daunting at first to step into the lab as a high school student, she said she loved the experience.

“Everyone here opened the door and was encouraging and so caring,” she said. “I thought I was going to come in and just watch.” On the first day, however, Ferreira asked her to sit down – that she was going to work and actually participate in things.

Ferreira’s expectations of her “doing” rather than watching might have been because of how impressed he was with her. He has worked with high school students before, he said, but never one more mature, dedicated and capable, he said.

And truth be told, his initiative reminded him of himself, he says. He recalled that when he was a freshman in college, he wanted to participate in a lab fellowship, but was turned away because it wasn’t open to freshmen. But because he showed interest, the professor invited him to drop by the lab, and he ended up working there throughout his college years.

This type of initiative can be important in science, he said. Likewise, Allen did not come to the lab through an established official program. Instead, an SOA science professor asked Advanced Placement Biology students if they would like to work in a lab during the summer.

“She came in one day and was like, ‘Hey, I did some research at MUSC, would any of you be interested?'” Allen recalled. “We thought it was a program. Little did we know she was just cold emailing professors at the university.

But once the teacher, Mary Kate Rumph, made the connection, it was up to Allen to sell herself. She read everything on the Ferreira Lab webpage – Googling a lot of terms to make sure she understood – and was able to show Ferreira that she was interested in the job, not just by checking an internship box under the direction of his parents.

“I was very impressed from the start,” Ferreira said.

Allen said she will apply what she learned in college and graduate school.

“I learned so much and I’m so grateful for this experience,” she said.

Not only did she gain hands-on experience in a lab, but she will also get her first co-author credit when the lab publishes a paper later this year.

Obituary: Des Casey, legendary FAI chairman admired for his passion and dedication, who lobbied for Jack Charlton to be given the role of Ireland manager