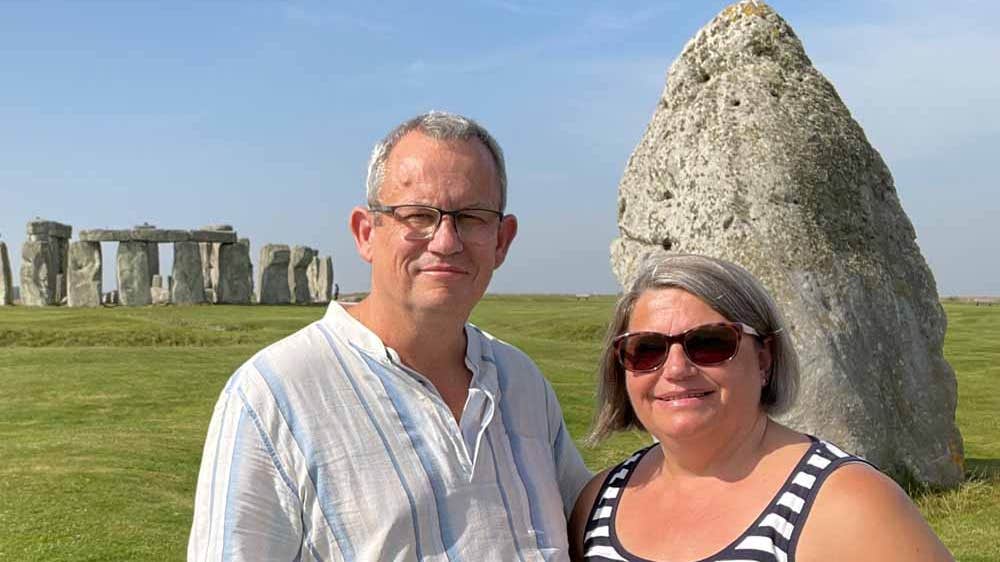 A loving dad was stunned when his passion for DIY saved his life after swelling developed on his right leg as he boarded his daughter’s loft and led doctors to find the “silent cancer” on his kidney that could have killed him.

Business analyst Gary Marshall, 57, is always the first to roll up his sleeves when someone needs improvements – fitting out the bathroom and kitchen at the home in Leeds, West Yorkshire, where he lives with his retired wife Elizabeth, 55, and still eager to help their adult daughters Catherine, Rebecca and Stephanie.

In early 2020, while transforming the loft of Rebecca’s new house into a sturdy storage area, he spotted a swelling on her right leg, which he had checked when she refused to come down, saying, “C was completely accidental. ”

He added: ‘I put it off for a few days thinking it was going to go down but eventually went to see the doctor who sent me for tests. That’s when they found out I had kidney cancer.

Suspecting he might have heart problems at first, Gary’s GP sent him for tests, which turned out to be clear.

Then referred for an ultrasound, in case he had anything else like a blockage in his abdomen, he was also prescribed an anti-inflammatory cream.

Within four days, the swelling – which was harmless and had simply been caused by kneeling for long periods doing crafts – was gone.

But Gary was caught off guard when the ultrasound revealed a 6.5-7cm tumor on his kidney.

At the time, it was March 2020, the country was in lockdown and Gary received his results from a follow-up CT scan – considered the ‘gold standard’ for X-rays – by phone.

He said: ‘I was sitting at home with my wife in my office when the doctor called.

“It was such a shock to hear I had kidney cancer over the phone, but because of the pandemic there was no other way.”

Gary was told that his cancer was aggressive but was discovered early and was stage one.

He hadn’t shown any of the traditional symptoms of the disease and would have been completely unaware he had cancer, if tests hadn’t taken place – brought on by his DIY injury.

Known as ‘silent cancer’ as it often goes unnoticed for a long time, and Gary was told he would need surgery to remove the kidney with the tumour, ideally within a fortnight.

However, the uncertainties of the pandemic meant he had been warned his operation might not take place for nine months.

Anxious, unsure how to access support groups in lockdown and not wanting to further worry Elizabeth or their children, he initially felt he should just ‘sit home and wait’.

Then, deciding to turn a negative into a positive, he walked 26 miles, raising £2,500 for charity.

And, nearly four weeks after his diagnosis, he received a call saying he was booked for surgery two days later.

The tumor was successfully removed and after further treatment for a hernia and some complications with his bowel following the operation, Gary was confirmed cancer free.

Since the operation, he has received invaluable support from the Kidney Cancer UK charity.

Gary said: ‘I found the charity after my operation but they have always been very important. Even now I go to their online support groups and just talk to people in the same boat.

He added: “They also have oncology nurses there, so you can ask them questions too. There are no stupid questions.

“Having people you can see face-to-face on video dating and getting to know over a period of time really helps your mental state.”

Talking to other kidney cancer survivors has also taught Gary that he’s not the only one on an unusual path to his diagnosis.

He said: “There are classic symptoms of kidney cancer, such as blood in the urine, back pain and pain in the sides.

“But for a lot of people I’ve talked to, they’re like me. They didn’t have these symptoms and their cancer was discovered accidentally when they went to the doctor for something else.

“If there hadn’t been work in the loft that day, I could have lived with it and not known about it and it could have spread.”

He added: “I feel so lucky. But I also feel guilt, as I talk to people who are going through a lot of treatment and, in a way, I feel like I’m getting away with it. cheaply.

Last summer, just a year after his battle with cancer, he dusted off his tools and built a deck in his backyard for a hot tub.

He said: “My wife and daughter, Stephanie, had to help me with the bridge or it wouldn’t have been done.”

He added: “I was too tired to spend the long periods I wanted there, but we finally got there.”

Thanks to the support of his family, friends and people he has met on Kidney Cancer UK’s online groups, Gary is feeling physically fit again and is looking forward to retiring in September to spend more time with his relatives.

And as part of Kidney Cancer Awareness Week, which runs from February 7 to 11, he wants to warn people about the signs of the disease.

Gary, who wants people to know that kidney cancer is the seventh most common cancer in the UK, with 13 people dying from it every day, said: “You hear about breast cancer, cancer bowel, lung cancer. But when do we hear about kidney cancer?

“I certainly didn’t know anything about it. If you have symptoms, please consult your GP. I’ve been lucky, but not everyone will be, so it’s crucial to act at the first signs that something is wrong.