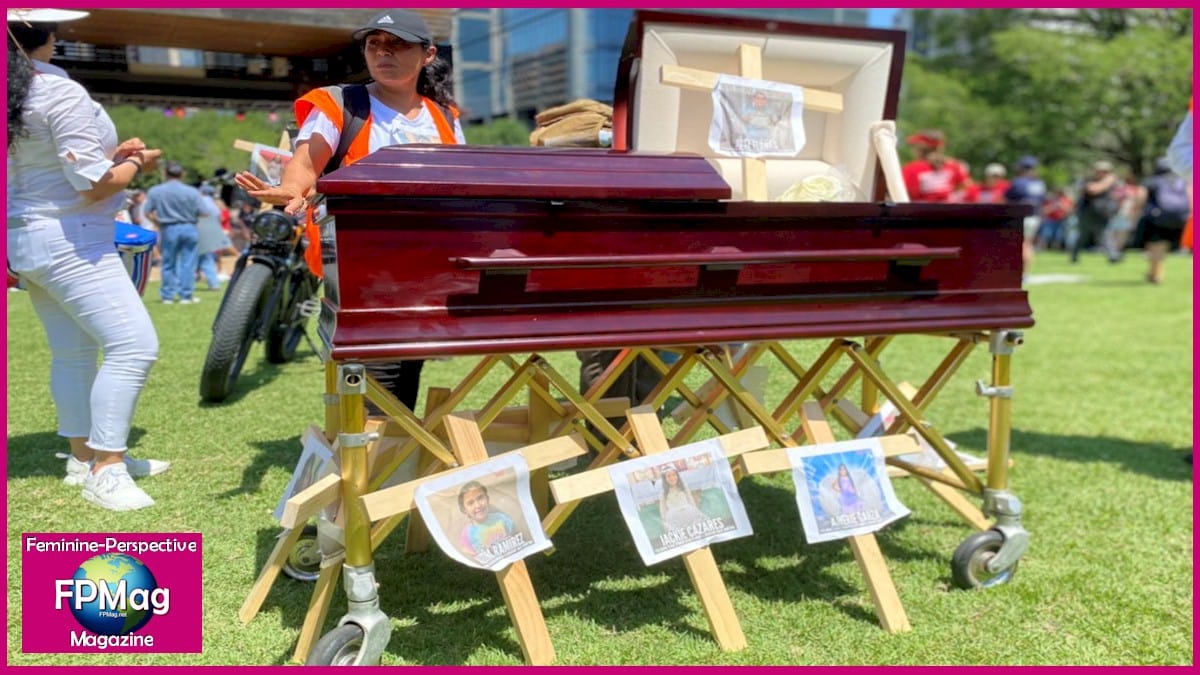 It is sad but no less true than the massacre of children and the resulting consequences total bullshit coming from the community leaders in Uvalde, Texas plus the NRAs shit in Houston, is usually America, in the 21st century.

(Sick America has 213 mass shootings this year, a norm so far.)

It’s not the America I learned to love in New York and the West from the country. I see, however, that ordinary Americans are still great, but the connection between the people and their leaders is so distant that the two groups have no truth about who they really are.

Hearing kids get killed as big cops report or hide for their own safety. Angry Mom protesters brought a coffin with crosses and pictures of the 19 children and two teachers killed in Uvalde, Texas on Monday to the NRA convention in Houston, Texas yesterday. Photo credit: Jamil Donith/Twitter. The photo is cropped. Art/Crop/Enhancement: Rosa Yamamoto FPMag

America has a death wish amidst a culture and passion for murder. children listen, especially children troubled by anything that threatens their future. Salvador Ramos, an 18-year-old loner with a speech impediment turned killer – was he another troubled kid who listened to all the violence?

From Ukraine, the US proxy war with Russia, looks like another made in America killing like America’s meddling and killing at home and in Vietnam, Somalia, Iraq, Syria, Afghanistan and now Ukraine.

The children listen to jingo and become feverish over Washington’s chauvinistic “capture or kill” narratives.

When US leaders lie about killing children in northern Idlib, Syria or Kabul, Afghanistan, and boast of having killed Bin Laden and Abu Bakr al-Baghdadi at home in other countries, or General Qassem Suleimani at Baghdad airport, America’s children are listening.

Today, the Pentagon’s Hollywood scenario of pushing Russia into a war in Ukraine, then killing Russians until every Ukrainian is dead is typical for America and also typically for America, doesn’t work. Meanwhile, as Secretary of Defense Austin explains, children listen.

Russia win in Ukraine despite old rule that it takes little to defend a land and a massive engagement to attack and occupy an asset. Ukraine has some 300,000 troops, including North Americans and Europeans, and more weapons per capita than any place on Earth, even America. In fact, America is running out of missiles and the like after giving away thousands to anyone and everyone in Ukraine, including black market traders.

The Ukrainians being so corrupt and so complacent helped America take control of their country over a 10 year period. Biden brags about it.

May this crazy Zelenskyy continue to be played by Americans is almost unbelievable. In fact, he keeps repeating the mantra: “We will fight Russia until the last Ukrainian is dead”.

But the gains Russia has made are territories that broke away from Ukraine and declared independence from Ukraine in May 2014. These are the people America calls rebels and separatists and so on. But that was nearly a decade ago. It was ethnic Russians who decided Ukraine was such a corrupt cesspool that they went their own way and formed two very functional republics. In a de facto meaning, Quebec in Canada has done almost the same thing. Taiwan has established itself as an autonomous entity since the end of World War II. These American “separatist” labels conveniently here and there, aren’t crazed fanatics or drunks, they’re grandmas and grandpas and some of the committed young people, moms and pops, who run their own country and seek to benefit from their own achievements in the context of true freedom and the right to self-determination.

I don’t think the Americans are opposed to this approach, especially in the context of Taiwan. But in the case of Lugansk and Donetsk in the Donbass region, American hypocrisy shines as a convenient point of challenge against Russia. But nobody really believes that it is necessary to kill 8 million ethnic Russians in the Donbass, do they? The Americans tried, “Until the last Ukrainian died.” And the kids are still listening.

“Since May 2014, ordinary people of Lugansk PR and Donetsk PR have been attacked by the most ruthless rapist pigs Ukraine has ever mustered, many wearing American shoulder flashes and swastikas, over the years,” says one of the aid workers currently targeted by the Ukrainian neo-Nazi brigades. This is why we no longer report their activities.

The RINJ Foundation has people in Ukraine who run women’s shelters and clinics. Some of these people are women who survived years in ISIS-occupied Syria and Mosul in Iraq. Even they say that being a woman in the Ukrainian Donbass is worse than even being a Christian woman in Daesh-controlled Mosul.

It is no less true that the defenders of Lugansk and Donetsk, especially before these republics organized themselves, have sometimes been ruthless rapists and bastards in the context of what amounts to a raging civil war.

Today the best man in the region Governor of Donetsk PR Denis Pushilin seems to lead the entire military operation in the Donbass region alongside Leonid Pasechnik who heads the much smaller republic of Lugansk. Currently, this effort includes regaining control of Mariupol which Denis Pushilin lost in 2018 to Ukrainian Nazi battalions, and the demining of the city that is underway, considered a monstrous chore. 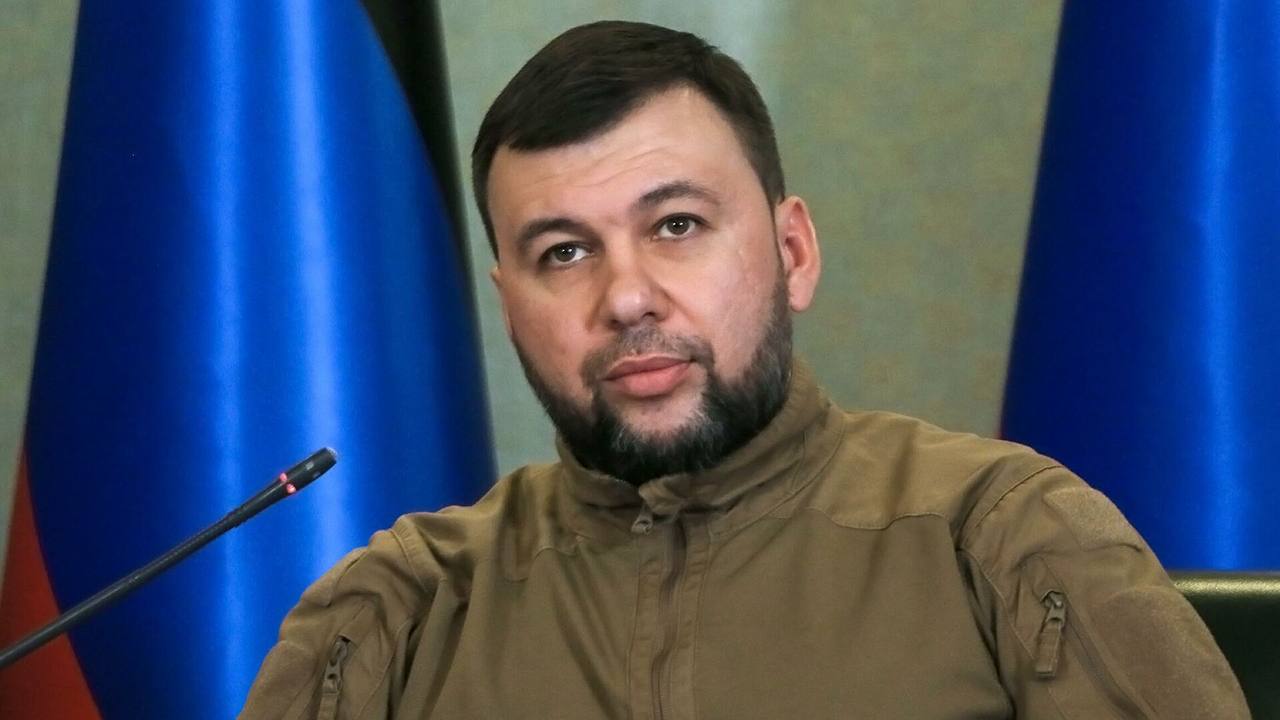 Notorious Denis Pushilin allegedly led a rally in Donetsk in April 2014, calling for an independence referendum along the lines of Crimea’s previous referendum, claiming to be deputy to the self-proclaimed People’s Governor of Donetsk, Pavel Gubarev. (Wikipedia) Mr. Pushilin was elected head of the Donetsk PR on November 20, 2018. Since then, there is a consensus that he proved his worth as the head of Donetsk during the difficult times of birth and refinement of this republic. Mr Pushilin is said to have proposed to the Kremlin that his republic of Donetsk be integrated into Russia. This is unconfirmed but probably true. Photo credit: Office of the Head of the Donetsk People’s Republic.

Why would Ukraine want to continue this bloodshed?

Why do America and Ukraine want this to continue? A passion for killing? Or a passion for the sale of weapons? After eight years of functioning as independent self-governing states and the loss of 14,000 of their inhabitants to Ukraine and American artillery shells over the years, the people of Luhansk and Donetsk have clearly unequivocally decided not to stay in Ukraine. It’s another American killing spree. American fighters and soldiers have been repeatedly spotted inside the Donbass line of contact and even killed there. It’s not a secret, but just something that the government-controlled media in the United States, like CNN, doesn’t talk about.

In flagrant violation of the Geneva Conventions, U.S. puppet leader of Ukraine Zelenskyy made every Ukrainian citizen an illegal combatant. An American idea. No uniform but plenty of guns, shoulder-launched missiles and rocket launchers issued to civilians. No rational leader who loves his country would deliberately invite the slaughter of civilians. In Ukraine, for all fighters in uniform, everyone is a potential enemy and a likely target. Illegal fighters will kill earlier than a uniformed fighter, so kill or be killed.

US and UK explosive ordnance shipped to Ukraine exploded in Ukraine killing more Ukrainians and further destroying the physical existence of the country. A passion for killing?

So how does the world convince Americans to stop killing? “We can’t,” is the answer.

America is heading for a massive world war unless this threat to humanity comes to its senses and finds better leadership. There is no indication that real change is in the wind. Maybe America needs to start listening to its smartest women.