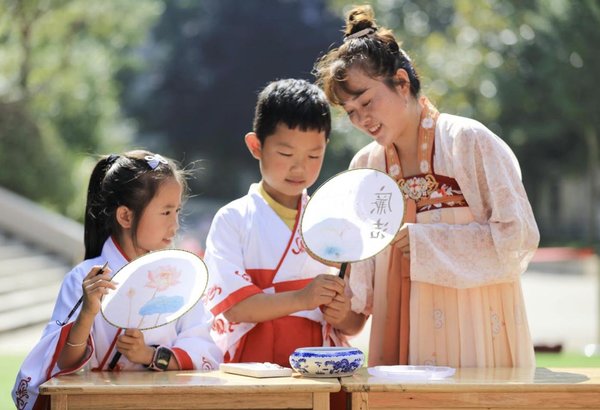 Guochao – a fashion trend translated as “China-chic” has swept Chinese consumers, especially younger ones, as they gain confidence in “made in China” products.

The trend is seen in many aspects today, including music, art, construction, furniture, costumes, food, and other everyday products.

According to a May report by the Chinese Academy of Social Sciences, about 90 percent of Chinese consumers were optimistic about the future development of Chinese products.

A survey published by McKinsey & Company also indicated that Chinese companies are making tremendous efforts to improve the quality, performance and value of their products, and Chinese brands are a choice for almost a third of consumers when they select high-end products.

Wei Jing, who works in the media, is passionate about Hanfu, the traditional dress of the Han ethnic group. She also hosts a Hanfu Gala, a popular online show among Hanfu enthusiasts around the world that airs every Chinese New Year. So far, the gala has been held for 12 years.

In 2010, when Hanfu was still unknown to many people, a group of Hanfu enthusiasts decided to organize a grand gala on the theme of traditional Chinese costume to celebrate the Chinese New Year with like-minded people. around the world. The gala received over 300,000 online views this year.

The costume, which has grown from a niche item to a widely accepted item, reflects the current trend of Guochao, a vogue that combines traditional Chinese cultures and modern lifestyles.

Brands old and new in China tap into traditional Chinese culture to create new creations, such as oil paper umbrellas made with old and modern techniques, hand fans developed with intangible cultural heritage skills, and plastic shells. ceramic 3D curved cell phone that takes dozens of procedures and over 100 hours to build.

Also, the Seagull Company, a longtime Chinese watch manufacturer, has released a product that features Hufu, or tiger pointing, which was used as proof of authorization in ancient China.

The trend of China-chic in consumption and cultural performance reflects a continuous change of Chinese people in aesthetic and cultural appreciation, as well as a great improvement in their cultural confidence.

The lifestyles and consumption values ​​of the younger generation have accelerated the rise of Guochao. According to a recent report by xinhuanet.com, Chinese Generation Z (people born between 1995 and 2009) contributed 74% of Guochao consumption. Statistics from an online shopping app also showed that in 2020, young consumers’ passion for Guochao products increased more than tenfold compared to the previous year.

“The makeup is so cool that I look like a character from the mural.” Chen Chen, a selfie lover from Peking University, recently tried a selfie app.

Pursuing the creative transition and innovative development of traditional Chinese culture using modern technology is an important trend in the development of Guochao, said Jin Yuanpu, director of a research center for cultural and creative industries at Renmin University of China.

At present, artificial intelligence, virtual reality, AR, metaverse and other new technology concepts are seeping into the design, production, advertising and consumption of cultural products, a-t he noted, suggesting that these technologies should be well exploited to build new business models and make more Guochao innovations.