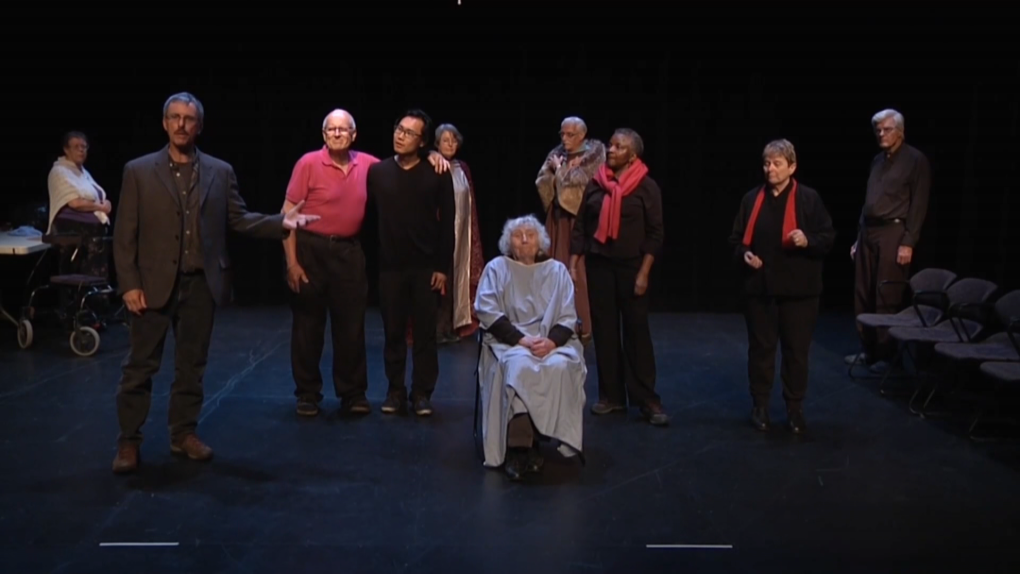 Most of Pearl Edward’s life has been spent working and raising a family. There were many things she wanted to do, but she never had time. Acting was one of them.

“I don’t have any type of experience,” Edwards said. “It was in my head that I would do this one day.”

Thanks to GeriActors Theatre, an intergenerational theater company, that day has finally arrived.

In 2000, David Barnet was teaching drama at the University of Alberta. One day, while watching his son play soccer, he was approached by the director of a society for the elderly, now called the Sage Seniors Association.

He told Barnet about a group of older people looking to get involved in theater and asked if he could help.

Barnet agreed to stop later in the week and meet the band.

“They were wonderful. Marvellous. And at the end, I foolishly said, ‘Will I come back next week?’ he laughed. “And it happened from then on.”

For more than two decades, GeriActors Theater has written, produced and performed original plays based on true stories and issues that come with aging, rather than age itself.

Telling stories, playing games, improvising and having coffee are part of the creative process.

“Challenging certain stereotypes I think is very important and something we don’t see enough of.”

Built on the principles of creative aging, those involved in GeriActors Theater believe that engaging older adults in the arts will only have positive results, including health benefits and increased social engagement.

A delight that also led to GeriActors & Friends, a collaboration with past and present University of Alberta students.

“There is no failure. There is no criticism,” Barnet said. “There’s just a joy that underlies everything we do.”

“NOBODY WANTS TO TURN OFF THEIR ZOOM”

When the COVID-19 pandemic shut down most in-person events, groups and organizations started moving online.

And these GeriActors were not going to be outdone. Barrington says the move to the Internet happened in a day.

“Everyone had access to [Zoom] and everyone was ready to try,” she said. “It was definitely difficult and there were some frustrating moments, but we all got it.”

GeriActors Theatre, an Edmonton-based intergenerational theater company, was established in 2000 as a place for seniors to pursue their passion for performing. During the pandemic, the group shifted to performing online.

During a time of isolation and uncertainty, Barrington wanted to make sure there was always a safe space for seniors – a way for them to always feel connected.

Most people might think that moving a group of seniors online might be a challenge, but Barnet and Barrington disagree.

“I think the band has always been able to adapt and try new things,” Barrington said. “So I wasn’t surprised.”

“But it was surprising how well it worked.”

Storytelling, games and improv have all moved to a virtual format.

Although the rehearsal itself may seem different, the band’s passion never gave up.

“Sometimes at the end of the day, after working for two and a half hours, we’d say, ‘That’s it, guys, we’ll see you next week,’ and nobody wants to go home.” Barnett said. “Nobody wants to turn off their zoom, hit that little red button and say, ‘This is it. »

The move to Zoom also meant a change in performance format. Without props or lighting, the GeriActors Theater decided to turn their original stage productions into audio pieces.

Happy with their work, a virtual performance has been set up. Family and friends were given a Zoom link and invited to listen from the comfort and safety of their homes.

“It worked,” Barrington said of reflecting on the first virtual performance. “The spontaneity and authenticity of a live performance translated into audio.”

But the success of the project was not the only surprise.

By simply clicking on a link, the world has become much smaller. People were connecting from as far away as Trinidad, Australia and the UK

“You think, ‘Oh, my God me!’ You’re reaching out to like-minded and feeling people around the world,” Barnet said. “I thought it was so exciting! If you’re 85 and you just started doing theater there is 10 years old, and now you do theater for people who look like you, but who are scattered all over the world.

“IT’S A FAMILY OF VOLUNTEERS”

The feeling of successful performance, and all that leads up to it, is something Barnet hopes more seniors can experience.

“It should be, rather, it could be part of all senior opportunities,” he said. “That they have this opportunity, this freedom, to choose artistic expression.”

The people involved in GeriActors call it a family.

“It’s a family of volunteers,” Barnet said. “You don’t have to be as careful as you would with your own family. And this family can really challenge you.

Edwards won’t be long in telling you how much GeriActors and her band mean to her. She has been involved for seven years.

“It was a way to meet people and get to know each other a little better,” she says. “And realizing there are things you didn’t know you could do.”

For Edwards, that means having the chance to use his GeriActors background to pursue professional acting opportunities.

“I feel like I come alive when I play,” she said with a smile.

“The dictionary doesn’t have enough words to describe the experience and feeling I have of being involved with GeriActors.”