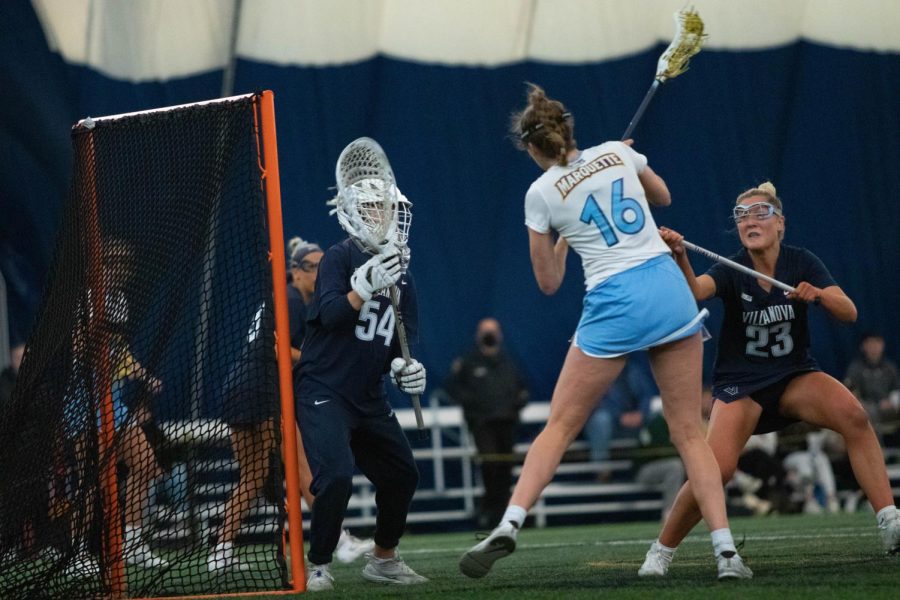 Sport has been a part of life for Elise Smigiel, a first-year Marquette women’s lacrosse forward and midfielder, for as long as she can remember.

“I’ve been involved in sports all my life, whether it’s watching my mom compete (or) watching my dad,” Smigiel said. “Every season I was involved in was one or two sports, so I’m very grateful to have that experience because they pushed me every day to be a better athlete.”

Smigiel grew up in a family of athletes, his father Jim being a rower at Drexel University, where he would later place at the 1988 Olympic trials. His mother, Margaret, was also a rower at Drexel before switching to cycling after having graduated from Drexel in 1996.

Even his older brother, Ryan, and younger sister, Lucy, play sports since Ryan is a junior on Drexel’s rowing team and Lucy is a sophomore in high school who is looking to play college lacrosse one day. .

A native of Flourtown, Pennsylvania, Smigiel said she discovered lacrosse partly through her mother, who is from Maryland, where the sport is popular.

“I started playing in first grade and (at first) you play to be with your friends, but I think I just really learned to love (the sport),” Smigiel said. “The pace of the game which I loved, there are power aspects but also fitness aspects and I just thought it was the coolest sport ever.”

Smigiel joked that it hurt her father that she didn’t become a rower.

“I just couldn’t walk away from lacrosse and the sport that I loved and the goal that I set for myself early on to play in college,” Smigiel said. “It’s just something I wouldn’t let go of.”

After four years as a college starter at Germantown Academy, where she would score 100 career goals, Smigiel commits to Marquette 11 November 2020.

“I had never heard of Marquette until I got a call from Coach (Meredith) Black and spoke to them, then I went out for a visit in my junior year and just loved it,” Smigiel said. “I loved the Jesuit aspect, I’m a practicing Catholic and didn’t really realize how much of an impact it would have on me and my life of faith until I arrived here.”

Smigiel said her faith helped her transition from high school to college in the fall.

“It was just a lot, I was 15 hours from home, I had no idea what I was doing in chemistry and I was traveling for lacrosse in the fall, all these practices, all the lifts, it was super overwhelming,” Smigiel mentioned. “The only thing that got me through was my faith and remembering that I’m blessed to be here.”

Even with her family nearly 850 miles away, Smigiel said her family is always there for her.

â€œThey’re always available for a phone call or FaceTime, anything. They’ve definitely been in a lot of games, way more than I expected, which has been so nice even though I just get a hug,â€ Smigiel said. “That’s all I need to remind myself that my rock, my foundation is my home and they will always be there for me.”

Smigiel’s faith has also allowed him to connect with some of his teammates, such as junior striker Mary Schumar.

“She’s my girlfriend at church, we go to church together a lot, but I always see her there, which is exciting and fun and that’s just that, building those bonds, just having fun with that,” Schumar said.

After sophomore midfielder Leigh Steiner and junior forward Hannah Greving suffered a knee injury against Northwestern on February 14, Smigiel was inserted into the starting lineup.

Although it was another adjustment Smigiel had to go through, she handled it almost seamlessly as she has scored 16 goals in 11 games since then.

Head coach Meredith Black said that while she’s proud of how Smigiel has stepped up, she said she’s not surprised at his abilities to do so.

Beyond what Smigiel was able to do on the pitch with her game, Schumar said she brought new energy to the offense.

“After she scores she gets really excited and I think as a rookie it’s so important and it’s so exciting, you’ve worked so hard to get that goal or to get that assist or just help the team to score that goal to get the ball up,” Schumar said. “I think she brings that light into our attack.”

Smigiel said that with BIG EAST in full swing in her new role, she’s excited to show off what she can do on this stage.

“I’m excited to prove to myself that I can have a really big impact on the BIG EAST and against these good teams, against UConn, Denvers, all these teams that are ranked,” Smigiel said. “Just proving to myself that I’ve earned my place and that I’m good enough to be here.”

This article was written by Jackson Gross. He can be reached at [email protected] or on Twitter @JacksonGrossMU.