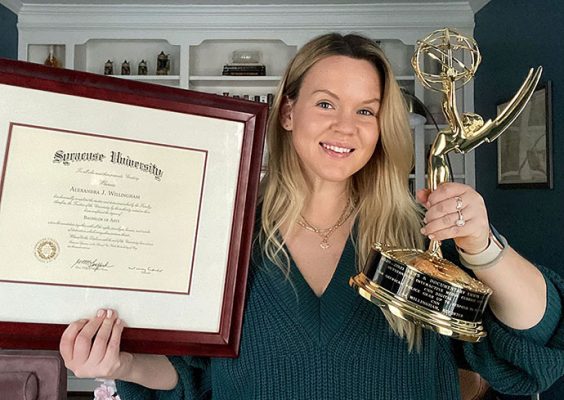 When AJ Willingham ’09 enrolled in the College of Arts and Sciences (A&S), she just wanted to be a writer. But the unique style she perfected during writing, rhetoric and composition studies (WRC) led her to great things, including a career at CNN Digital and an Emmy Award for Outstanding Interactive Media.

Willingham started as a broadcast major at the SI Newhouse School of Public Communications and later joined the School of Architecture, but when she learned that the College of Arts and Sciences had recently created a new major in writing, rhetoric and composition, she made yet another switch.

Willingham liked the freedom and challenges of the program. “The WRC program quickly felt like home. It was an opportunity to explore who I was,” she says. “The faculty was very receptive and extremely interested in the students’ ability to tell their stories without filters. They understood that there was a certain amount of revelation – and it was embraced, no matter who you were. Plus, there was a huge element of community responsibility and the idea that as a writer you had to do something with it.

“We had conversations with faculty about how to identify people’s places in the community and were given new language to talk about these things in the world,” Willingham adds. “It was an education in how to use language that respects people. He pointed out that you interact with the world when you put things down on paper. And that a good writer is a good learner, and a good learner is a good citizen.

WRC Professor Lois Agnew, Associate Dean for Curriculum Innovation and Pedagogy, as well as former Willingham Councilor, remembers her as a student whose passion stood out.

“AJ was one of those people that was so great to work with,” Agnew says. “The aim of the WRC program has always been to find students who love to write, who are fascinated by the language and who want to see where it can take them. AJ has certainly taken what she learned here and, combined with her own unique style, put it into practice.

Willingham graduated and went to work for CNN at its Atlanta headquarters. After a few years, she found her niche writing for CNN Digital and was eventually promoted to Senior Editor. Willingham has gained more recognition as editor of CNN.com’s daily e-newsletter, 5 Things, and The Good Stuff, an e-newsletter she created with inspirational stories and the power of people who do. a difference in their communities.

“The WRC program gave me the confidence and the ability to say, ‘This is how I am, and this is how I write’,” she explains. “My vision and the unique voice I think I bring to my work has really helped define my career.” 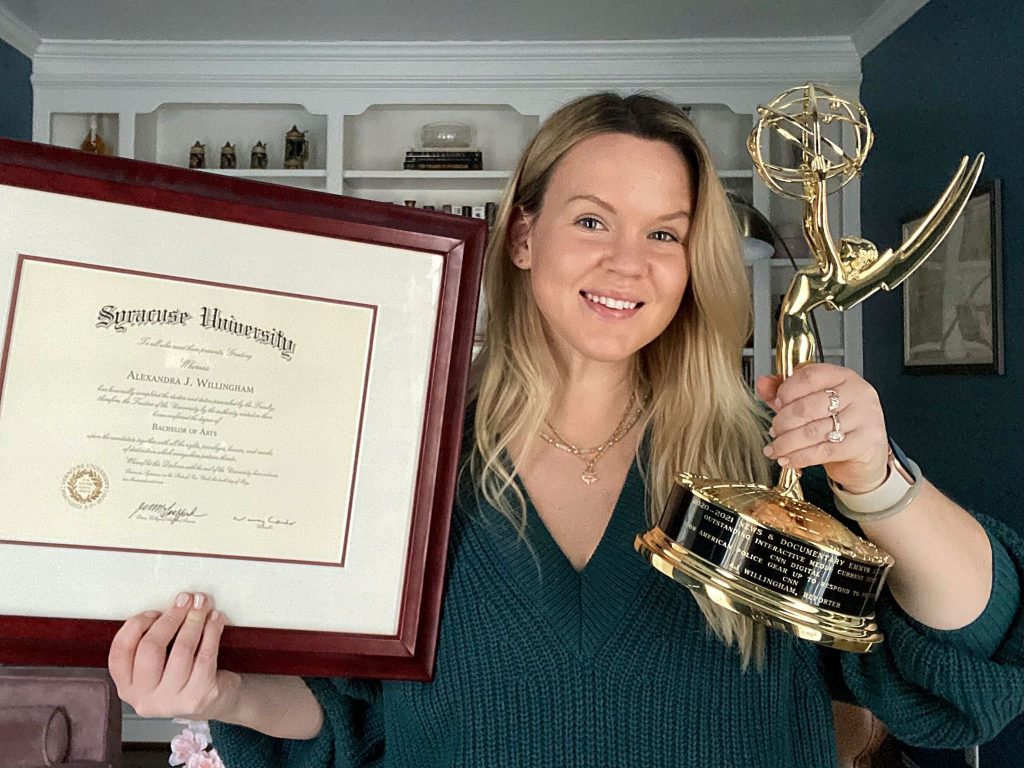 AJ Willingham holds her degree from Syracuse University and her Emmy Award which she won on CNN. (Courtesy of AJ Willingham)

Winning an Emmy, however, was unexpected. During the pandemic, she and her colleague Sarah-Grace Mankarious were watching footage surrounding the death of George Floyd and the social justice protests unfolding in 2020 and a light bulb went out. Why was there such inconsistency from city to city in the types of gear police officers wore? This curiosity turned into an interactive CNN, How US police are preparing to respond to the protestswhich examined the lack of regulation and varying levels of funding that determine the amount and type of riot control equipment police can obtain.

The piece is mounted on CNN.com in May 2021, but one day in August, to her surprise, Willingham’s phone started exploding with congratulatory messages. She had been nominated for an Emmy Award.

“I wanted to educate and empower people,” she says of the project. “For me, it was much more about finding the significance of discovery and putting words next to words. But, in the end, I ended up with an Emmy.

Willingham’s career continues on an upward trajectory. She is grateful to be able to do what she loves and appreciates the courage the WRC program and teachers have given her to be herself and develop her skills and talents.

“Writing is my first love, and I learned to love intentionality and the little things — the words you choose, the purpose with which you go about sharing information,” she says. “Your innate gifts, skills and abilities are unique, and developing your own voice is the key to forging a career and having the kind of success that makes you proud of yourself.”