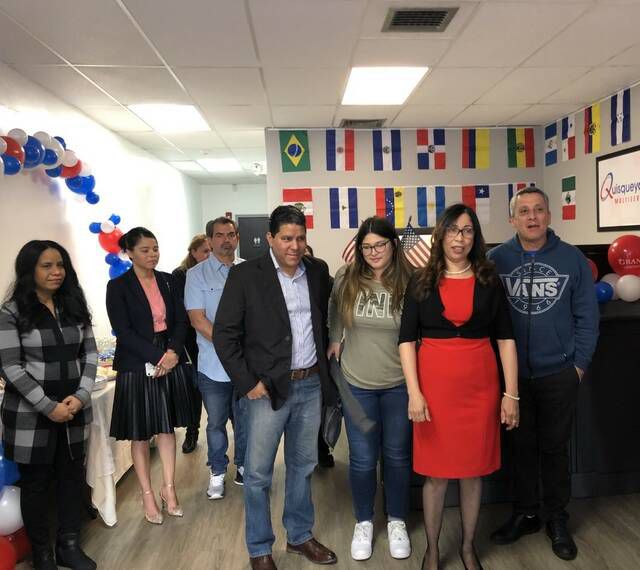 WILKES-BARRE – It’s hard to believe there’s so much going on in Danny Marisol Lugo’s little shop, until you meet her.

Lugo quit her job as a waitress to start her own business, Quisqueyana Multiservice, which handles tax returns, accounting, notary, money transfers, immigration forms and more. The plus is helping non-English speaking clients with filling out forms and applications.

“They come to me and I help them do this and sometimes they ask me, ‘How much do I owe?’ And I say, “Give me whatever you think is reasonable,” Lugo said. “Because I just want to connect the community that’s in need with the resources that are out there and they don’t know about it.”

In the future, Lugo planned to start a Hispanic Association to help people integrate into American culture. “So they’re doing the right thing in the right way and they’re going to the right people,” she said.

The business has developed a loyal following since opening in December, with people often waiting for her to return to the storefront at 57 N. Main St. in Wilkes-Barre. A few of them were present with Lugo’s family on Thursday for the grand opening and the ribbon cutting.

Lugo, 51, from the Dominican Republic, described herself as no different from other female entrepreneurs. “We decided to move forward for our dreams, for what excites us. I feel passionate about helping people,” she said.

Others also helped Lugo. Her former colleague at the restaurant where she worked, Jose Perez, provided financial support by becoming a partner. She also benefited from the Spark New Business Development Program created by the Greater Wyoming Valley Chamber of Commerce in conjunction with the City of Wilkes-Barre.

A Spark grant paid 12 months rent for Lugo. She thanked the House and Mayor George Brown for their support.

Brown, who along with House officials attended the groundbreaking ceremony, said the program was funded by $1 million of the plan’s $37.1 million in pandemic relief funds. American rescue ships directed to the city by the federal government.

“I feel good every time I’m invited to a Spark grand opening because it’s like something that we work on together and we give money back to people that we got from the federal government,” Brown said.

When Lugo was considering starting her business, she went to City Hall and spoke to Brown, who referred her to the grant program.

“I really appreciate that. You don’t know what you did. Thank you very much,” Lugo told Brown.

The mayor responded with a compliment. “You are the future of Wilkes-Barre,” Brown said.