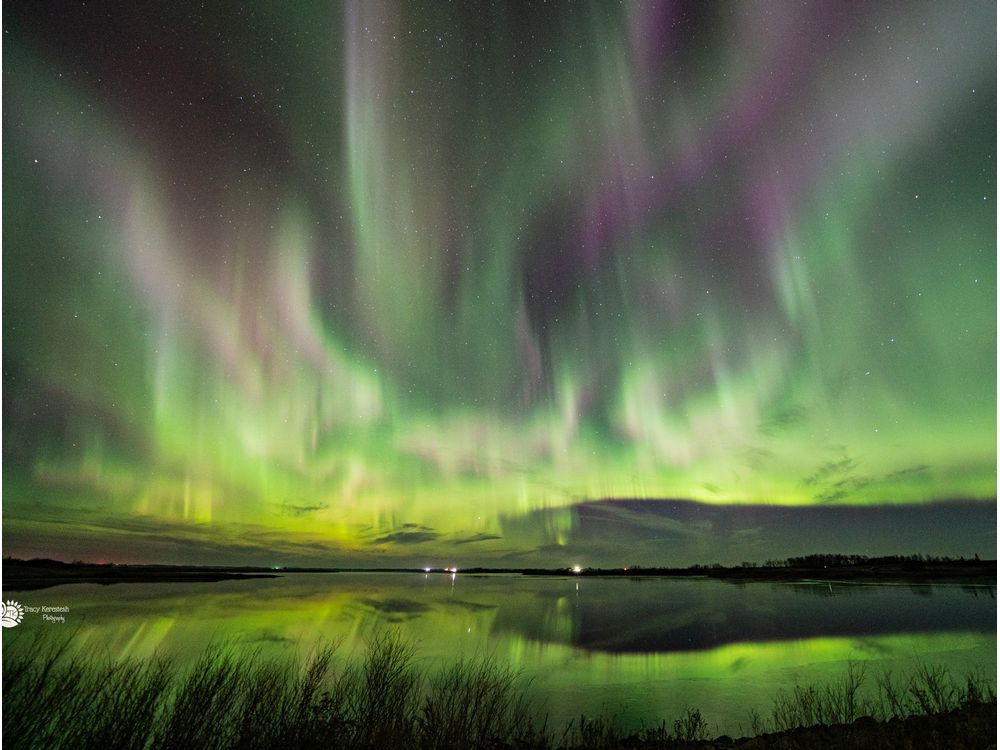 In some cultures, the dancing lights of the Northern Lights are believed to be the spirits of deceased loved ones trying to communicate with the living.

It was a new concept for Melville photographer Tracy Kerestesh, but this one, she says, perfectly describes how she feels when looking at the lights.

“Auroras are quite magical,” Kerestesh said in an interview on Friday. “When the sky starts dancing like that, it makes you feel like there’s something much bigger than you in this world.”

During a particularly active solar storm on Wednesday evening, Kerestesh phoned her father so they could both watch the lights and talk about her mother, who had died the previous week.

Over the phone, they remembered his mother as well as Kerestesh’s grandson who died of leukemia eight years ago in June. A professional photographer for 41 years, Kerestesh said it was the death of her grandson that ultimately inspired her to search for the Northern Lights.

“After he passed, I just had to find something to go on, so I made a little to-do list. I got my diving license, I have a Harley Davidson,” Kerestesh said.

Then she took a ride with a storm chaser and her passion for the Northern Lights was born from there. When she first got into it, she said there was a season when they “burst” all year round. But then it stabilized for a few years. Now she said things seem to be picking up.

She hit the road in November last year when one of the most intense displays of the Northern Lights in years put on a show across the northern hemisphere and again on Wednesday for a show she says had its own unique offering.

“I had never seen red,” she says admiringly. “You get pinks and you get purples, but it was like red.”

According to the Government of Canada website, the pink and dark red hues are caused by nitrogen molecules at altitudes of around 100 kilometers. Bright red occurs when the aurora collides with oxygen atoms at altitudes of 300-400 km.

A love of night photography has led Boan to research and photograph the aurora for the past decade. He said the Prairies offer unique opportunities to document the phenomenon.

“There are only a few places in the world where you can do this and many of them are only certain times of the year like Iceland.”

But he said the lights can be a little disappointing for some who see photographs and have certain expectations of when they will see the aurora themselves.

“When people first come out, sometimes they’re disappointed,” Boan said. “Sometimes they can’t find it because they’re looking for that really bright colorful display that they see in photos and that’s not what our eyes are picking up.”

Because a camera can capture much more light than the naked eye, the natural colors of the aurora are more visible.

While this may be disappointing to some, it’s the mystery of how the dancing lights will translate into photography that fascinates amateur photographer Larry Hubich.

“It’s a lot of fun; it kind of pulls me in,” Hubich said. “If I pull up to that sky where I see that aurora, what’s going to come back? What is the image that I am not able to capture with my human eye and that the camera can capture?

Hubich was staying with his in-laws near Preeceville when the lights came on Wednesday. He said he’s only been filming aurora sightings for a few years and still has a lot to learn, but the learning process is slow when you only get a limited number of ideal nights per year. to see the lights clearly.

“I’m still hoping I can improve a bit,” he said. “I would like to refine the images a little more, so hopefully good nights ahead.”

Hubich and Kerestesh use apps that alert them when and where a good aurora sighting is expected.

“I’ve seen some really amazing ones where I’ll be standing until the sun comes up because they’re amazing,” Kerestesh said. “No matter which way you look, they are everywhere. It’s a bit addicting.

Sometimes she does it in her pajamas, other times in a ski-doo suit, depending on the time of year, but she says it never fails to amaze.

“I’m a Christian so when I look up it just reaffirms that God is much bigger than me and it just makes me feel a little less worried about weird things,” Kerestesh said. “It gives me some peace.”

News seems to be flying towards us faster all the time. From COVID-19 updates to politics and crime and everything in between, it can be hard to keep up. With this in mind, the Regina Leader-Post has created a Afternoon titles newsletter that can be sent to your inbox daily to ensure you are up to date with the most vital news of the day. Click here to subscribe.

Sign up to receive daily news from Regina Leader-Post, a division of Postmedia Network Inc.

Thank you for your registration!

A welcome email is on the way. If you don’t see it, please check your spam folder.

The next issue of Regina Leader Post Headline News will soon be in your inbox.

We encountered a problem during your registration. Try Again