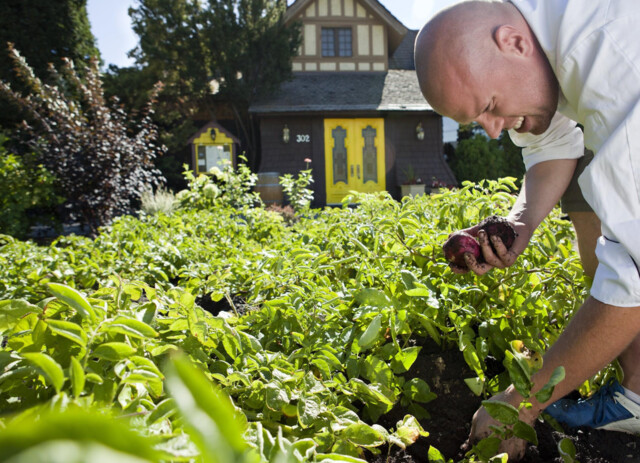 “Okanagan Inspired” is a weekly profile series providing insight into the stories and inspirations of South Okanagan residents who play creative roles in the community.

A long-standing passion for food is behind the beloved food that Penticton’s iconic Bogner’s Restaurant serves every season.

Born in the small town of Deep River, Ontario, Chef Darin Paterson has traveled the world to learn and share his culinary skills.

“We moved when I was a teenager and spent my young adult and early twenties life in Edmonton. I went to NAIT and became a Red Seal chef. I left Canada for 12 years to cook at various restaurants in Saudi Arabia, Stockholm, Sweden and Singapore. “

Upon his return to Canada with his Swedish wife, they agreed that Edmonton was not the right place for them.

“We decided to do a tour of Vancouver and see if there would be a place in Vancouver to open a restaurant, but along the way when we got to Penticton we saw that Bogner’s had been put up for sale 2- 3 days ago It reminded me of a place I had in Stockholm, so we bought it and never been to Vancouver, ”says Paterson.

Now that he’s been in Penticton for 15 years, Paterson still feels like he’s the right person.

“I love the availability of produce here and how he is so agriculturally active. We have wineries and distilleries and I think this is a great place for a chef. There are so many options to get creative with, ”Paterson says.

The culinary arts have always been a passion for Paterson.

“My first job when I was 12 or 13 was at Dairy Queen. I thought it was easy after school work and easy money. I also really appreciated the individual aspect of customer service. I really thought it was cool, how you could see the whole process from start to finish in the day, ”he says.

Bogner having a long and rich history in Penticton, Paterson appreciates being a part of its history and appreciates the fit.

“Bogners opened in 1976 and the original owners have owned it for 22 years. The second owner had it for nine years and I have had it for 15 years now. This restaurant has always been a very warm place for the locals. The warmth, the atmosphere and the people who work there make it a great place, ”says Paterson.

In addition to his story, Paterson adds his own experience and creativity to the restaurant.

“Owning it was a natural transition. Some chefs are good at preparing food, but there is also the hospitality aspect. I like to talk to people, open up and give people general information about how my mind works and flavors, ”says Paterson.

With an ever-changing menu, using what is available in the area is important to Paterson.

“Our ingredients don’t have to be the most expensive or the most inaccessible. We use what we can of what surrounds us and work to put away what we can when there is abundance. You can’t just call and have things on demand all year round. You have to work with what is available, ”says Paterson.

In addition to changing the menu with seasonal availability, Paterson has a second reason for keeping it fresh and exciting.

“Our menus change all the time because we want to do something different and current. I don’t want to make the same calamari every day. It’s important to mix it up and keep it fresh and exciting, ”he explains.

“For beginners in the kitchen, I say always work in restaurants where you learn. The moment you stop learning, you will never reach your full potential. When young chefs take jobs where they are paid better, but learn less, they halt their development and it is more difficult to drop out at a later age. Working on a restaurant conveyor belt will not push you or help you develop your cooking understanding. “

Although it is difficult for him to choose a favorite thing to cook, you can often find Paterson making shakshuka, a traditional Middle Eastern breakfast.

“I like it with salty cheese, runny eggs and flatbread,” he says. While cooking, he will be found listening to Bo Kaspers Okester-Undantag. “It’s a Swedish song. I see it as a modern day love song and it reminds me of my wife, so I think that’s why it’s my favorite song. “

Bogner’s is open every week Tuesday through Saturday for dinner and will be offering a contactless Christmas drive-thru dinner on December 24-25, and for every meal sold, they’ll donate a quart of soup to the South Okanagan Women in Need. Society.

Costume: APS did not investigate reports of guns at school before shooting